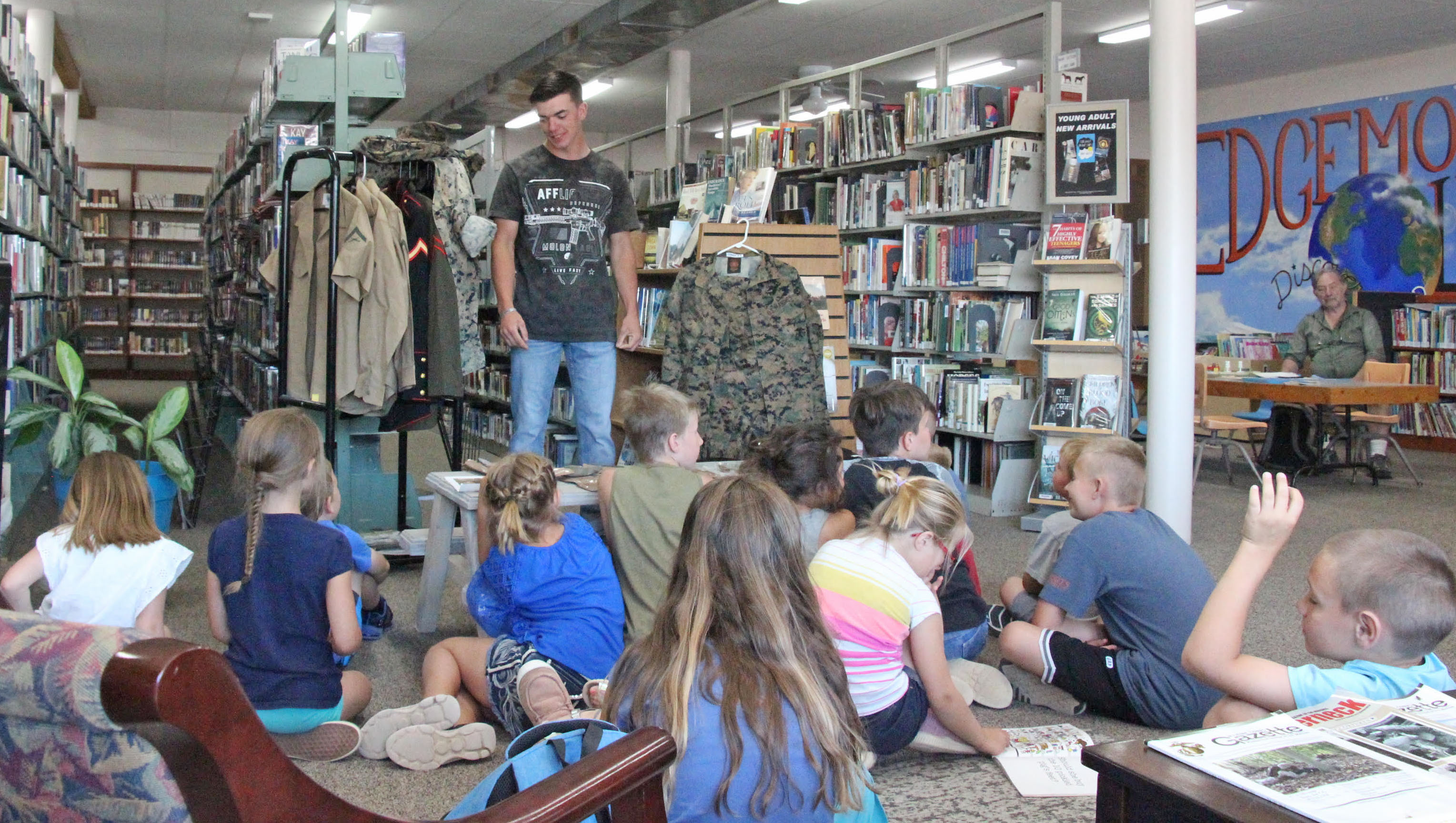 EDGEMONT – Lance Corporal Nate Leonard, who grew up in Edgemont and enlisted in the United States Marine Corps at age 17 last year, made an appearance at the Edgemont Library to share his experiences with 17 Edgemont YMCA kids between the ages of 5 and 10 years old.

Leonard completed Boot Camp at the Marine Corps Recruit Depot at Camp Pendleton in southern California, where he was only allowed three scripted phone calls during the 16–week training period. Following Boot Camp, he completed two months of Marine Combat Training also at Camp Pendleton. Three weeks into Motor Transportation Schooling at Fort Leonard Wood in Missouri, he tore his ACL and MCL, which delayed his graduation by 9 months. He will join the fleet at Camp Lejuene Marine Base in Jacksonville, North Carolina by July 2nd where he will be tasked with Motor Transportation duties.

According to Leonard’s mom, Stacie Harter, the separation imposed by Boot Camp was very tough for her to endure as a mother. Because of Covid-19, Leonard was not allowed to experience the 10-day leave period that normally occurs starting the day upon which they graduate as new Marines. Harter was unable to attend her son’s graduation due to Marine Corps protocol for dealing with the pandemic.

A benefit that Leonard had at his disposal was the hearing the experience of his step-father Larry Harter who served a 6-year enlistment in the Corps from 1984 to 1990. Knowing what to expect from drill instructors and to be prepared for the mental challenges that come with completing Boot Camp, were among the things passed along by Harter.

About two weeks before he came home, Harter approached Leonard about speaking to community youth at a library program so that they would have familiarity with what it is like to enlist in the military from the eyes of someone who just completed training. The kids were made aware a week in advance of the program and according to their YMCA leaders were excited about meeting Nate and learning of his early adventures in the Marine Corps. During the program, almost every kid asked at least one question and most listened intently as Leonard shared his experience.

When he spoke to the kids, Leonard talked about the different bases he had received training at in California and Missouri. He shared the importance of discipline and adhering to rules, which are strictly enforced. When asked what he got in trouble for most often, he cited eating outside of meal time and laughing at the drill instructor while in line.

When asked what was the hardest part of his training, Leonard talked about the intensity of the Marine Corps Crucible, a 54-hour final challenge that requires recruits to carry a 75-lb pack during intensive team-building challenges while allowed a total of only 8 hours of sleep over the entire exercise. He also talked about the gas chamber, an experience that occurs during the third week of training, so that they know how to use a gas mask under extreme conditions in the event that they are ever under gas attack.

Leonard brought along some Meals-Ready-To-Eat (MREs) for kids to see and told them that sometimes you had to eat in a hurry. He told of once killing a snake and eating it and talked about killing tarantulas that occupied their camp.

Leonard brought along different uniforms that are worn during the year and talked about what duties or occasions that each is used for. He showed the kids which pants and shirts were worn together.

While waking up and getting yelled at every morning during Boot Camp was a challenge, Leonard described the brotherhood developed there as ‘special’. He said the scenery around him during the experience was enjoyable also.

Leonard emphasized the grading and evaluation that goes with individual performance in the military. Recruits are graded on their shooting accuracy and must complete a certain number of physical fitness exercises such as push-ups or pull-ups or finish within a certain time.

Finally, Leonard talked about the history of the Marine Corps and the challenge it presents as one of the more difficult branches of the military to serve in. He said that he hopes to stay in for 20 years and make it a career.