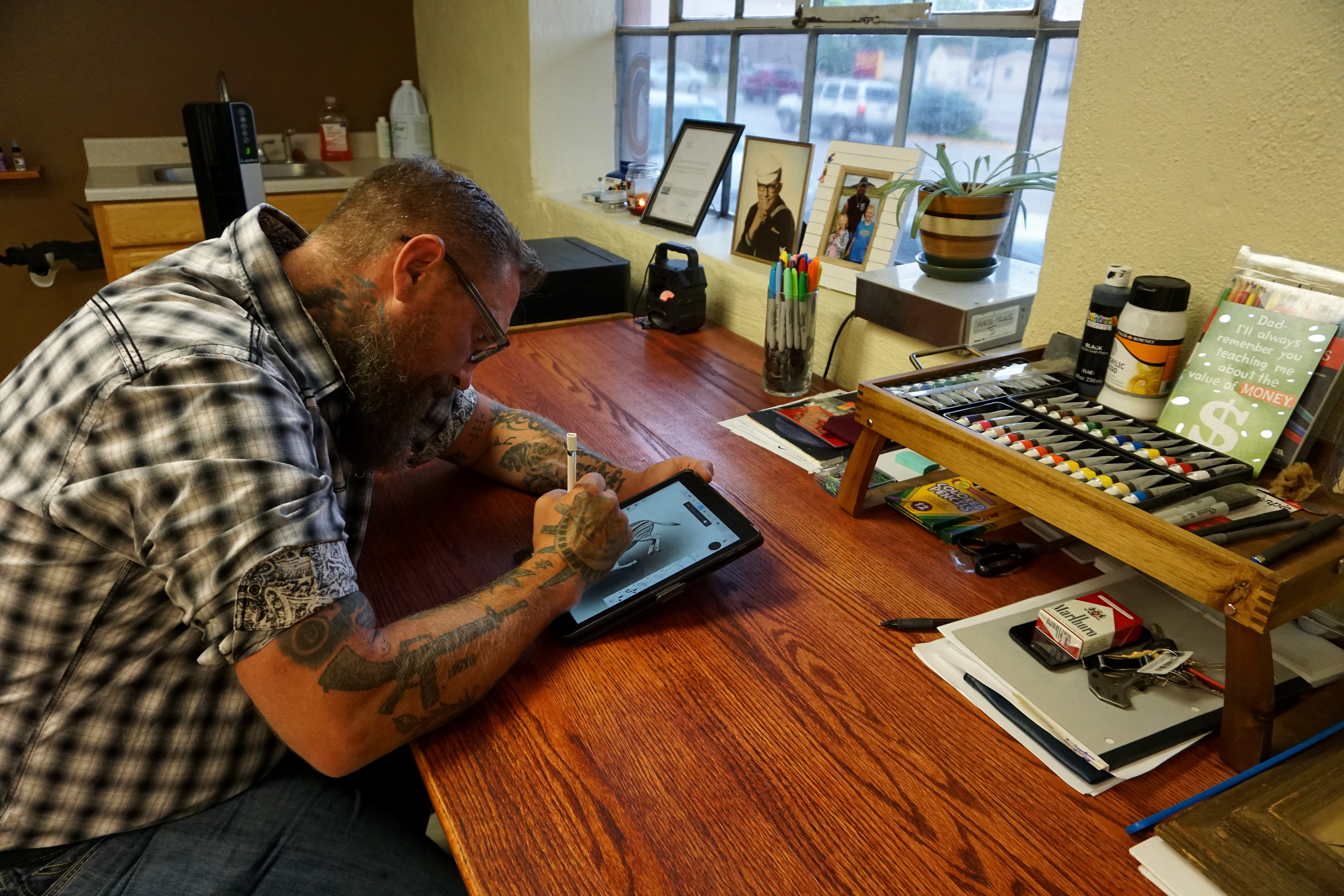 Kochel uses a digital art platform on his iPad to create tattoo designs for his customers.

Originally from the Spearfish area, Kochel has been a tattoo artist since 2009. Previously, he served five years of active duty and then three years with the South Dakota National Guard. During his tours in Iraq while with the Marine Corps, he worked as an Intelligence Analyst for Marine Aircraft Groups 11 & 16 in the Direct Air Support Coordination Center.

Returning home after the war to South Dakota, Kochel was influenced by his brother’s work as a tattoo artist, and the pair worked together in Spearfish before he headed out on the road. Kochel traveled and tattooed customers as far west as Los Angeles, Calif., and as far south as Galveston, Texas. Additionally, he tattooed rally-goers at the Sturgis Buffalo Chip each summer from 2009-2015.

After working a short time in Rapid City, Kochel moved to Hot Springs to be closer to his girlfriend, and opened Legacy Tattoo in mid-May. The tattoo shop is located in the historic Bering Arms building on University Avenue.

When asked why the name “Legacy Tattoo,” Kochel explained that “art runs in the family.” Many of his family members are artists, including his young children. Kochel’s great aunt’s oil paintings are housed at the Smithsonian Museum in Washington, D.C., and his brother is a tattoo artist currently residing in Texas.

“I wanted a business and business name I can someday pass down to my kids,” Kochel added.

In addition to local customers, the shop has served people from throughout the Southern Hills, Nebraska, Wyoming, and Colorado, as well as other areas of the United States. Kochel also has a loyal client base from the northern Hills who come down to see him for their tattoos.

Kochel likes to work on custom tattoos for his customers, and adds a personal touch to each one. He uses a digital art platform on his iPad to draw out and construct tattoo designs. This process can take anywhere from several hours to several days. He also does tattoo coverings, making old or unwanted tattoos into new creations. He recently changed a “Fear Satan” tattoo into a large Nebraska Cornhusker “N” flanked by deer and ears of corn.

Kochel believes his time spent in the military makes it easier to serve his veteran customers with their tattoo needs. Being a veteran himself, he said that he better understands what veterans want and the meaning behind certain tattoos.

“I have received tattoos from many tattoo artists who are veterans,” Kochel explained, “Each of them has a meaning.”

Legacy Tattoo is located at 712 University Avenue, Suite A, and is open Tuesday-Saturday from 11 a.m. - 7 p.m. Appointments are preferred but walk-ins are welcome. Call (605) 891-9657 or visit www.legacytattooblackhills.com for more information.