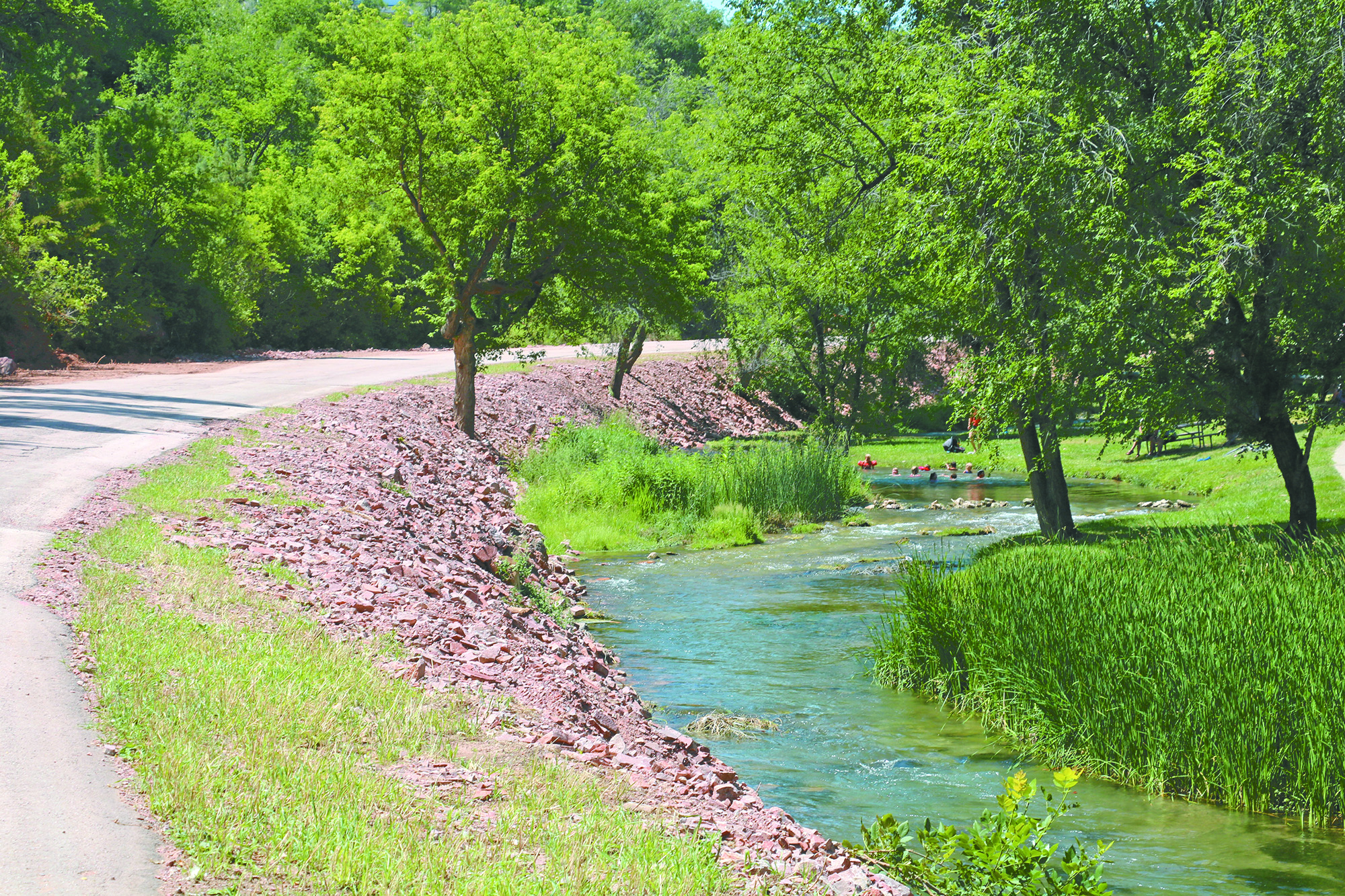 In order to widen South Garden Street, city workers removed the vegetation between the road and Fall River – from the Brookside Park bridge to the area in front of El Rancho Apartments – and replaced it with rock from the State Home. Pictured on the right is the Brookside Park swimming area.

HOT SPRINGS – In anticipation of the replacement of the Jennings Avenue bridge near the American Legion, personnel with the City of Hot Springs Streets and Maintenance Departments have been busy with a project that will widen South Garden Street, which runs parallel with Fall River.

According to City Administrator John Gregory, the Jennings Avenue bridge replacement project will begin later this month with the removal of the current bridge on or around July 16 by Dietzler Construction from Berthoud, Colo., which is who earned the state bid. The current project schedule calls for it to be completed by mid to late November. However, Gregory said that may be an optimistic plan. He said that, depending on weather, crews may need to come back in the spring to finish it.

With the Jennings Avenue bridge no longer in operation for a few months, the anticipated traffic use – especially for emergency vehicles coming from the Hot Springs Volunteer Fire Department – the need was high to make Garden Street wider and safer.

Gregory said city workers, along with a contracted tree removal company, have been working on the Garden Street project since about the beginning of June. Work has included the removal of four large cottonwood trees – some as large as six feet in diameter – along with the removal of several other smaller trees and shrubs. The vegetation was then filled in with rock and gravel that was donated to the city by the State Veterans Home, as the result of what was blasted away several years ago to make room for the new Michael J. Fitzmaurice building.

The newly placed rock will then allow for additional land to widen the road. Gregory said a secondary reason for bringing in the rock was to stabilize the road, which was being eroded by the river.

The added rock is a very noticeable attribute of the Freedom Trail in the area of Brookside Park, where the once lush green vegetation on the south side of the riverbank is now replaced by the red color of red clay. Gregory said that fact has been the only complaint thus far that the city has received about the changes. He added however that some of the green vegetation removed was poison ivy and other noxious weeds.

The road widening project will be ongoing over the next few weeks, which will also include the removal of one more large cottonwood and then the grounding up of the current asphalt using the city-owned “zipper” machine. Gregory said the road will then be regraded and layered with rock and asphalt millings. This is all planned to be completed by mid-July, before the current Jennings Bridge is removed.

Ultimately, Garden Street will then also be paved and striped, but that may not take plus until a later time, Gregory said.

While the Jennings Bridge is being replaced, Gregory noted that there will need to be an access created to for heavy equipment to get to the river from above. The work will require a rechanneling of the river while the new bridge is being built. Through that process, the cattails will be dug up and removed which will be a preview to what the city hopes to eventually accomplish in the years to come in other parts of the river through town.