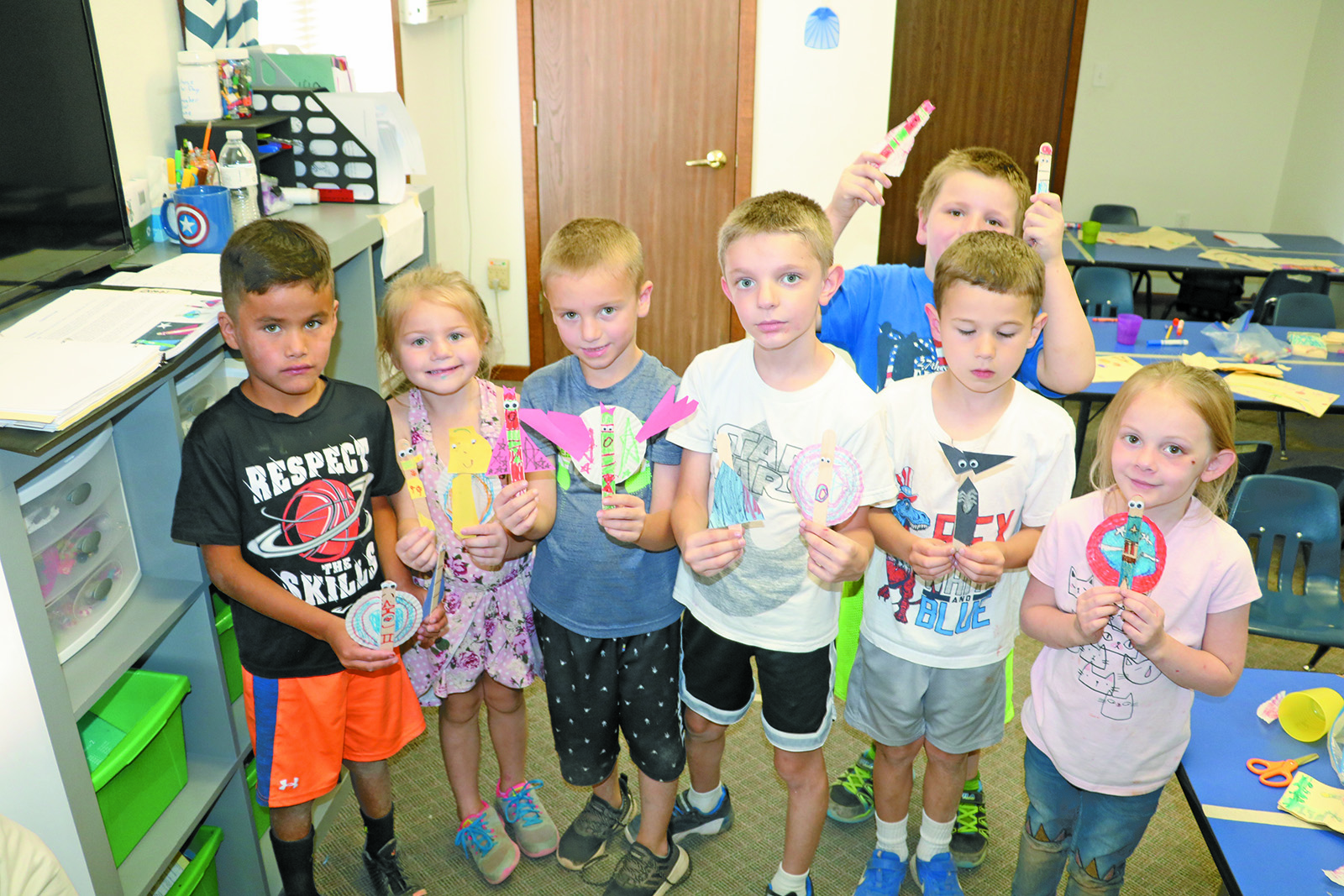 Some of the younger members of the Boys & Girls Club of Hot Springs hold up their art projects, which are their favorite superheroes made out of construction paper and popsicle sticks.

HOT SPRINGS – The Boys & Girls Club of Hot Springs has come a long ways since they first opened their doors on Jan. 5, 2009, in the Hot Springs Elementary School’s multi-purpose room with five children in attendance.

The effort to bring the new club for school-aged children to Hot Springs actually began two years prior as part of the community-wide Horizons Study Circles. From that, a Youth and Children Task Force was formed which ultimately connected with the existing Boys & Girls Club of Black Hills in Hill City, which provided the blueprint to start and the path for future success.

The Hot Springs club soon outgrew their home in the school and was allowed to expand through Bethesda Lutheran Church, when they donated the use of their basement, kitchen, dining room and playground for many years until about two years ago, when the club moved into their current home at 105 N. River Street.

The acquisition of the former home of The Discovery Zone Children Development Center was made possible by John and Dusty Pence of Hot Springs, who donated over $300,000 via their donor-advised fund at the Black Hills Community Foundation in May 2018. After some paint and some minor remodeling, the Boys & Girls Club of Hot Springs moved in on Sept. 3, 2018.

With a total annual membership of more than 200 school-aged youth, the club was serving between 65 to 70 per day – that was until COVID-19 forced the closure of the club in March.

They however have since re-opened on June 8, but have had to limit the amount of youth they serve per day to only 40.

Kyle Stainbrook, who serves as the club’s Senior Unit Director in both Hot Springs and Lead-Deadwood, said it didn’t take long for those 40 spots to fill up, which is also the limit that was set in Lead. In Hill City, which is the Boys & Girls Club of Black Hills primary location, can have a few more since their facility is considerably larger and includes a gymnasium.

Membership into the Hot Springs club’s after-school program is available for youth in grades Kindergarten to age 18 and is only $25 a year per child. Stainbrook said the fees are purposely kept low so every child has the opportunity to join. During the school year, their hours are 3 pm to 6:30 pm. They are also open on Fridays from 7:45 am to 5:30 pm at a cost of $10 per day.

During the club’s current Summer Camp Program – during the months of June, July and August – they are open Monday through Friday from 7:30 a.m. to 5:30 p.m. and charge just $25 per month for youth to attend.

Stainbrook has been with the Hot Springs club nearly three years. He has a Human Services degree from Black Hills State University but came back to the area from Chicago after attending seminary there, where he worked in youth ministry. He oversees a staff of nine, who work various shifts throughout the day.

The biggest advantage of the club moving into its new home in downtown Hot Springs, Stainbrook said, is their ability now to have full control of their own space. He explained how it was sometimes difficult to keep their youth members confined in only their designated area of Bethesda Church. The total space they have now is also slightly bigger, and is all theirs to do with as they choose – including a large kitchen, various rooms on two levels in which to divide members by age for different programming, as well as an enclosed outdoor play area.

Some of the disadvantages of the move however includes no longer having access to a large outdoor playground on-site, and of course also the additional maintenance and utility costs of operating their own building.

To make up for the lack of their own large playground, Stainbrook said they often utilize the city’s nearby parks, including Centennial Park just down the road, as well as Butler Park a few blocks up the hill. Also, thanks to the support of the community and increased membership, Stainbrook said they have been able to adjust to increased ongoing costs.

The Boys & Girls Clubs of the Black Hills is a nonprofit organization whose mission is to enable all young people, especially those who are in the most need, to reach their full potential as productive, caring, responsible citizens. They have programs on Education & Career, Character & Leadership, Health & Life Skills, Arts, Sports, Fitness and Recreation.

Stainbrook said the Hot Springs club takes great pride in being a part of the community and being able to offer parents a safe and affordable place for their kids to socially interact with others while doing something meaningful and productive.

Once a youth member enters through their doors, they are divided up into three or four various groups. A typical day for a member during the Summer Camp Program starts with an age-appropriate morning casual activity like coloring or games, a breakfast and then a morning recess. Mid-morning sees them participate in more structured and often educationally-focused activities until lunchtime. Following an afternoon recess, there are then a couple of other different sessions of structured activities and another recess.

Two of the bigger local fundraisers for the Hot Springs club include the Stars, Stripes & Steps, which was moved this year to Septembers, along with the annual Wine & Wreaths event in November.

The organization however accepts donations of funds and items throughout the year. Currently, Stainbrook said the club is in need of spray sunscreen. He said another item that has been on his ‘wish list’ for sometime is a digital projector which they can use to play videos onto the wall from a laptop computer.